Rotary Connects the World is the motto of Rotary’s 1.2 million men and women across the world during the year 2019-2020. The Rotary Club of Leicester Novus constantly lives up to the motto with frequent visits from Rotarians and non-Rotarians from the UK and much further afield.

The most recent visitor was dentist Smita Athavale, who is a member of the Rotary Club of Poona West, Maharashtra, India. Smita was visiting her husband Avinash, a plastic surgeon working in Leicester and helping their daughter settle in at Birmingham where she is studying for her PhD.

Smita was wearing with pride a T-shirt marking her club’s 50th year and revealed that she was born in the same year as the club. “We are in our Golden Year,” she quipped, with a smile.

She revealed that she was the first female member of her club — and, indeed the first woman Rotarian in District 3131 — when she joined at the age of 30. Smita showed a few slides which proved that hers is a club even more active than Novus, working in several health-related areas.

Working with 40 non-governmental organisations, Rotaract clubs, Interact clubs and other Rotary clubs, she said the Rotary Club of Poona West had been for the betterment of the environment and celebrating culture.

But the figure that drew the biggest gasp from among her Novus hosts was when she said 34,000 children had been taught about Cyber safety.

Smita’s new friends in Novus — and no doubt her husband and daughter — look forward to seeing Smita again before very long. 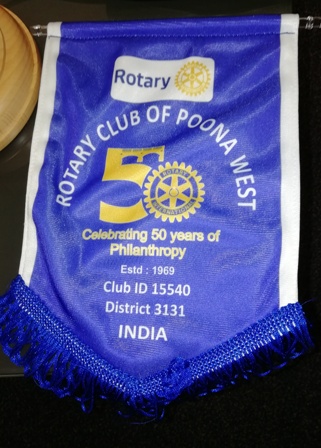 The banner of the Rotary Club of Poona West

In recent months Novus has regularly welcomed two Japanese post-doctoral students (one of whom has joined the club), a Rotaract member from Goa, and Rotarians from Malawi and Canada.

FOOTNOTE: Avinash is a Rotary-Ann. That’s the name affectionately given to the wives of Rotarians (when Rotary was a men-only organisation). It came about in 1914 when Mrs. Ann Brunier and Mrs Ann Gundaker were two of the few wives who accompanied their husbands to the Rotary Convention in Houston, Texas. Avinash has been an active Rotary-Ann, giving many hours to children who need operations for cleft lip and other conditions.

In Great Britain and Ireland, the Association of Inner Wheel Clubs is a happy ‘home’ for many thousands of wives or Rotarians. Recently many Inner Wheel clubs have accepted women who may not have any family connection to a Rotarian. It is not open to men.